Well done everyone! We’ve done it! We’ve beaten the evil kitten-eater Simon Cowell and the winner of his spreadsheet talent contest The Excel Factor, Steve Brookstein, in their bid to get the Christmas number one with their cover of Disney starlet Billy Ray Cyrus’s hit, The Fall. (Yeah, that sentence has too much “spoof”. I know. Well, I haven’t posted properly in a while, I’ve got to get my remaining spoof out before the year ends. Plus I don’t watch X Factor, so only have a vague idea of what actually goes on.)

Anyways, yes, a lot of “us” bought Rage Against The Machine’s Killing In The Name, regardless of whether we liked it or not or remembered the song first time round etc etc. And we drove it to number one, with 50,000 more copies sold than Joe McElderry’s The Climb.

Though why people are calling this a chart upset beats me. Or even a Christmas number one upset. Sure, the X Factor winner has been number one for the last 40 years so this year’s X Factor’s winner was guaranteed it again, even if the winner had been a raisin wearing a woolly hat. But then a Facebook campaign/group started, attracting almost 1 million followers – 500,000 more members than actually bought the single. (Eh?)

So when you expect several hundreds of thousands of people to buy a single and there’s a damn good chance that it hits the top spot – that it actually gets there isn’t that surprising or even that much of an upset. Okay, so it beat what most people expected to be there instead (well, most people prior to December), but it’s just not that surprising. If Lady Gaga – who ended up in the third spot – actually got to number one instead of either single, that would be an upset. If Michael Jackson had suddenly appeared on the Monday in HMV Oxford Street and urged everyone to buy his new single for Christmas and it hit the top spot, that would be an upset. If the number one “spot” magically disappeared and there was NO number one, that would be an upset. If…oh, you get the picture.

And the same goes for Christmas number one upsets in previous years. For example, 1985 is often mentioned as an example – when Shakin’ Stevens Merry Christmas Everyone beat Whitney Houston’s Saving All My Love For You. Upset – what upset? More people bought Shakey’s single.

And it’s about Christmas, at least.

And look at his nice red scarf:

It’s a sure sign that you’re getting on a bit when a song gets to number one in the charts and you think, “What on earth’s that? I’ve never even heard it!” Alas, such thoughts popped into my head last Sunday when I discovered that Lady GaGa was number one in the UK with her Let’s Dance.

Now, this lady has been creating quite a stir in London this week as she’s been parading around our streets wearing some rather interesting outfits. She’s over here to, er, do something. Here’s one such outfit:

I can see your pants!!

Now, I take a look at that and think “Hmm, she was wearing that on a cold winter’s day, but she’s clearly devoted to fashion. This woman is fierce. Fresh. Futuristic. Fabulous. And probably f***ing freezing too.” So, all of those ‘f’s (apart from the last one, obviously) makes me think that, musically, she’d be really cutting-edge and excitingly new and hot. And then I heard her song, the one that’s currently number one in the UK:

And then I thought to myself, “Wow. What a rather bland pop song. I have heard this before. I just thought it was by some really nondescript girl band. Oh.”

So bright! It hurts my eyes!

When the BBC are getting part of its staff to make crank calls to waiters from Barcelona, they’re going around making stupid decisions like this. Today, the Coporation confirmed that there will be NO Top Of The Pops Christmas special this year. Although the weekly programme itself was taken off our screens a couple of years ago, the jovial yuletide extravaganza continued to be shown.

But alas, not any more.

Top of the Pops and Christmas Day go together like the colours pink and blue on a neon logo – i.e. nearly perfectly. The TOTP Christmas special is tradition, something to watch to remind yourself of the year’s musical highs and lows whilst you wait for your mum to cook lunch.

And more to the point, what are they going to put it it’s place? More of The Two Ronnies? And hour-long Queen’s speech? High School Musical 1, 2 and 3? Aardman Animations can’t crank out new Wallace & Gromits each year!

And people want to see the main programme resurrected too. There’s me, The Ting Tings, Adam Ant and the Kaiser Chiefs – a stellar combination of people. If we can only get Five Star and Milli Vanilli onboard, maybe the BBC will listen to us.

Who watches X Factor? Why? What is remotely interesting about it? Unknowns singing (sometimes strangling) known songs week in week out – to quote Pink, so what? This, of course, is after the much publicised auditions where you either have to be not quite right in the head by believing yourself to be the next Whitney Houston when in fact your voice sounds like a dying cat so everyone laughs at you, or have some kind of dramatic sob story so the programme makers will devote half an hour to you.

I’d like to see the following happen at an X Factor audition:

Simon Cowell: “Why are you here today, why do you want to win the X Factor?”
Auditionee: “I…*sniff*…split some coffee on my favourite top today and I really want to prove to everyone…*tear rolls down cheek*…that I’m not just about spilling drinks on myself, but that I’m actually quite talented…”

If I were Leon Jackson, I’d be majorly pissed off. And not just about charting one place behind a guy that’s parodying the contest you were in. I mean, Leon’s won what’s supposed to be the UK’s best talent competition (there’s something very wrong about those last few words) and then after one quick single to ensure the Christmas number one, they’ve waited ten months before releasing any new material. And that’s the lead single they’ve decided to give him?!?! Can no one write him a decent pop song? This one is appallingly bad. It sounds like something Robson and Jerome would have rejected.

Although who brought us the singing sensations that were Robson and Jerome? That’s right, Simon Cowell. *sighs* 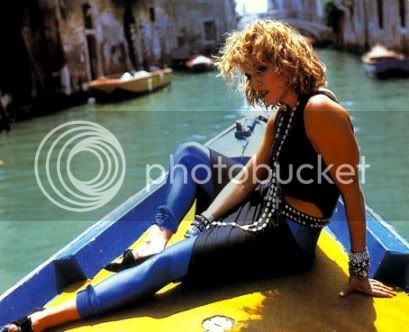 Madonna in the 80s – the good old days

In honour of her Madgesty’s 50th birthday next year (and my! She doesn’t look a day over 49!), the all-round entertainer is due to re-release some of her greatest hit singles as downloads in a battle to beat Elvis Presley’s record of the most UK number ones. I’m not entirely sure this makes sense though – I’ve just done a check on iTunes, and plenty of her old songs are available for sale there. If hundreds of thousands of us in the UK bought Into The Groove right now, that’d be number one this Sunday, right? Oh well, the blaze of publicity at this attempt won’t hurt her, I suppose.

She’d better get a move on, though! Elvis has had 21 chart-toppers, but Madonna has only had 12 number ones. Ooh, it’s gonna be tough, girl! In fact, she’s also behind The Beatles (18 number ones), Cliff Richard (14) and Westlife (14). Ha ha, perhaps that’s a more attainable target – beating Cliff Richard and Westlife!

WAIT A MINUTE!! Westlife have had 14 number ones?!?! British record-buying public, ARE YOU OUT OF YOUR MINDS??

Urgh. The X Factor single is the Christmas number one. Leon Jackson’s This Is A Rubbish Song (You’re All Mugs For Buying It And Making Simon Cowell Richer) shot to number one, selling 276,000 copies in only one week. Oh alright, the song is actually called When You Believe and it’s a slightly re-writen cover of a Mariah Carey and Whitney Houston song. Double urgh. Leon’s single sold the most number of copies in one week of any song released this year. People, people, will you never learn??