Way, waaay back in March 2007, I commented on the news that ITV had obtained the rights from the BBC for terrestrial FA Cup games. Warning everyone that the coverage would “suck” (to use a technical term), I told people that they should expect:

Little did I know how much the coverage would suck…and, in a rather suprising move, that ITV would decide to do all of the above at the same time. Like this week, when they decided to switch to an ad break during extra time of the Everton – Liverpool FA Cup fourth round replay, missing the only goal of the game.

But maybe there’s something positive to take from this cock up; perhaps ITV have actually stumbled across a new type of broadcasting. People’s attention spans are getting shorter and shorter these days and, although there’s lots of channels to choose from, getting from one to another to start watching something else involves…pressing a button. That’s hard. So why not just show lots of programming at the same time? Start by showing Dancing On Ice, then just cut to the middle section of the news, then to Phillip and Fern giggling for a couple of minutes on This Morning, then Loose Women gabbing on about some old crap, and finish it off with a bitchfight on Corrie, before going back to someone saying their goodbyes on Dancing On Ice because they’ve just been voted off.

Alternatively, they could always just interrupt their ad breaks with live goals.

Here’s the football/ad break mistake, “as it happened”:

Why David Beckham ever decided to go an play for LA Galaxy whilst he still reasonably young, I’ve no idea. I mean, sure, go over to American and play “soccer” when you’re 39 and clearly over the hill and never going to be called up for the national team again. But not when you’re 33, eh? Although it probably wasn’t his idea. VICTORIA, STOP TRYING TO RUIN YOUR HUSBAND’S CAREER!

Anyways, David Beckham scored his first goal for his new club, AC Milan – where he’s “only on loan for three months” – yesterday. And a pretty nice goal, too. Well done, Derek.

I’m not sure what kind of weird LA-with-mates-let’s-go-and-pick-up-lots-of-chicks-and-wear-really-dodgy-clothes-and-piss-off-Alex-Ferguson-as-much-as-possible holiday Cristiano Ronaldo is on, but there’s new pictures of him in the papers every day. They’re worse each day. And every day they want to make me want to vomit just that tiny bit more. (Phew! I’ve just used up my entire hyphen quota for the year!)

Here’s the latest of him turning a really weird and somewhat painful colour:

On the other hand, people haven’t been tanning with such abandon since the 70s…although his foot will be an incredibly comedy colour when his cast/weird sock thing comes off.

This story really gets a Nelson-from-the-Simpsons style: ha ha!

CBS, broadcasters of the 2004 Superbowl during the half time of which Janet Jackson kind-of exposed her nipple, have had their fine thrown out by a US Appeal Court. The fine, of $550,000, was originally levied by the Federal Communications Commission (FCC). According to the BBC News website:

The court said the FCC had traditionally fined broadcasters for indecent material only when it amounted to “shock treatment” for viewers.

In this case, the footage – lasting “nine-sixteenths of a second” – was too brief to merit such a penalty, it added.

So, here’s some video of the incident. Be careful. This really might be the most shocking thing you ever see on the Internet, I’m warning you right now…

Ian Wright, a pundit on the BBC’s Match of the Day, is to step down from his role on the programme. He’s claimed that the BBC only hired him to be there as a “comedy jester” against the other straight-men pundits (Alan Hansen, Alan Shearer et al.) and he no longer wants to work for the station.

This INFURIATES me! Ian Wright wishes he was a comedy jester – he’s somehow got the mistaken belief that he’s incredibly funny and entertaining, and a real “man of the people”. He’s none of that. If Alan Hansen were giving feedback on Wright, Alan’s favourite phrases “mediocre performance” and “diabolical” would appear.

I have no idea why the BBC ever hired Wright in the first place, and I’m at a loss to say why they’ve kept him for so long.

Wright has also said that fans cannot relate to the current presentation of the programmes:

“I don’t know how long young people are going to want to sit down and watch that same old ‘jacket, shirt and tie’ format.”

Why not? What does he think we’d rather watch, football yobs sitting around in full kit?

David Walliams, star of Little Britain and other general comedyness, is to swim cold sea waters once again! He’s due to swim the Strait of Gibralter for Sport Relief, the BBC’s sport-based (of course) fundraiser. Walliams will in fact be joining Olympic gold medalist James Cracknell, who is going to cycle, row and swim from the UK to Africa, for part of his journey. BBC News states that

Walliams had been due to be in the US working with his fellow Little Britain partner Matt Lucas but said he became available after the writer’s strike finished last week.

Wha…? Were David Walliams and Matt Lucas due to take over US television as a part of a bid to save audiences over there from sheer boredom, prompting them to…oh, I don’t know…go out and do some exercise or something? Phew, thank goodness the writers’ strike is all but over, in that case.

About his efforts, Walliams rather humourously states

I thought, ‘what could I do?’ And I thought perhaps I could steal some of James Cracknell’s thunder by joining him on the swimming part.

But my goodness! James Cracknell will be rowing the English Channel, cycling down France and Spain and then swimming the Strait of Gibraltar – resting for only 4 hours out of every 24! All I can say is – good luck James! 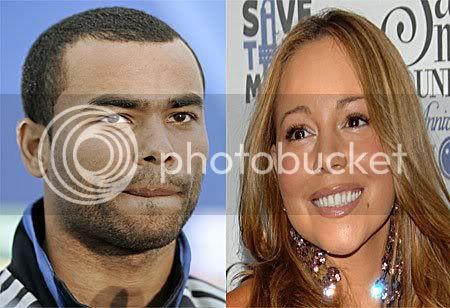 Mariah Carey has revealed that she is distantly related to Chelsea football star, Ashley Cole. Upon researching a possible link to American jazz crooner, Nat King Cole, Mariah discovered the family connection to our very own Ashley. Mariah says:

“It’s fascinating. My grandmother was a Cole before she married and it turns out she comes from the same area of Alabama as Ashley’s ancestors – the Deep South.”

Sure is fascinating, Mariah. Ashley’s not saying anything as yet, but his spokesperson said:

“I don’t know if he’s heard the Mariah’s story or not but I know Ashley was born and raised in East London.”

Which is clearly THE least helpful quote ever. It’s like saying “I don’t know if he’s heard Mariah’s story or not but I do know Ashley has hair” or “…but I do know he is eating dinner tonight”.

There’s a tonne of stories circulating about how employers check up on their workers by looking up their MySpace or Facebook pages to see all sorts of incriminating photos and written profiles…and then sacking the people with very dubious photos or who boast about their rather dodgy nightime interests. But generally they’re 20-something office workers…not teenage tennis players!

Naomi Broady and David Rice, promising British junior players, have both had their funding withdrawn by the Lawn Tennis Association for, essentially, breaching their contracts by behaving unprofessionally. They had posted up pictures and written about partying and drinking on their pages on the social networking site Bebo.

On Broady’s Bebo page, she wrote that she hated:

“hangovers after a good nite owt”

whilst Rice wrote that:

Shocking. Truly shocking. I mean, Watford? REALLY?!? Furthermore, I think they should be fined extra for this awful text speak, hahahaha LOL!!!11!

Best quote of all comes from Andy Murray, Britain’s number one tennis player, on the situation:

“I made some mistakes when I was 16 or 17 in Barcelona but now I don’t go out, I don’t drink, I don’t smoke and none of the top players do.”

UPDATE: The Sun has a little more, including one of the “offending” pics – Naomi Broadby posing with a condom machine…classy. It also says that her Bebo page stated she had “broken the law”. Wow! What could that be? Not paying the congestion charge? Ducking through customs after a shopping mini-break? Admitting to actually liking Pete Doherty? Oh wait, that last one’s not illegal…yet…

[The title of this post should be sung to the tune of Backstreet’s Back by The Backstreet Boys, incidentally. Heh. That’ll be in your head all day now.]

So this is Beckham’s first test for his long-haul commute from his new day-job in America back to his home country. After playing in against the New York Red Bulls at the Giants Stadium in New Jersey on Saturday evening, Beckham jetted off back to England to practise with the national team ahead of tonight’s friendly against Germany at the new Wembley Stadium. He’ll then jet back to Los Angeles to play against Chivas USA in a game on Thursday night.

Hey, it’s not so bad. I’m sure he’s flying all over the place in plush, first-class seats. My only worry is jet-lag – how’s he going to cope with that?! Sit him on the bench for the England, and he’ll probably dose off. And then he’ll be wide awake at 1am. Poor lad.

David Beckham last week finally scored his first goal for his new team LA Galaxy from a wonderful free kick. More impressive was that it was his first start for the club. Galaxy went on to win the game 2-0, win the MLS league by 37 points, win the FA Cup, and win the US Presidential Election 2008.

Okay, so not really. (Ha! Had you fooled for a second there, didn’t I?!) But they may as well have down, what will all the hoo-hah. Still, congrats to Becks for his first goal. Take a look at the video above because of 1) said beautiful free-kick 2) the Galaxy fans practically slaughtering themselves over the excitement that they’ve got a free kick which their new god will take, and then going mental when it’s gone in 3) Posh’s completely over-the-top celebration – seriously, woman, calm yourself and 4) the commentators speculating that he probably did this sort of thing way back when for Preston North End. Yeah, right!